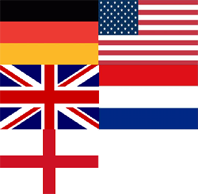 This small Online Shop from the author-couple Hannelore Goos and GardenStone is presented in the languages German, English and Dutch.
Both authors published books in those languages and they are listed in all three language sections. However, the descriptions of the Dutch books are kept in Dutch in the German and the English section, and likewise this is maintained for the German and English books. The leading thought for this is the view that someone who is interested in a book in such a foreign language at least has enough passive knowledge of that language.

Sometimes the question is put, why in this shop the English flag is used as a language symbol. The answer is simple: because that flag was presented as such by our software. We ourselves do not have particular sentiments about this, if an American or an Australian flag would have been offered, we had taken that one.

The size of the books is given in centimeters. Those who are interested to know the size in inches: 1 cm = 0.39 inch.